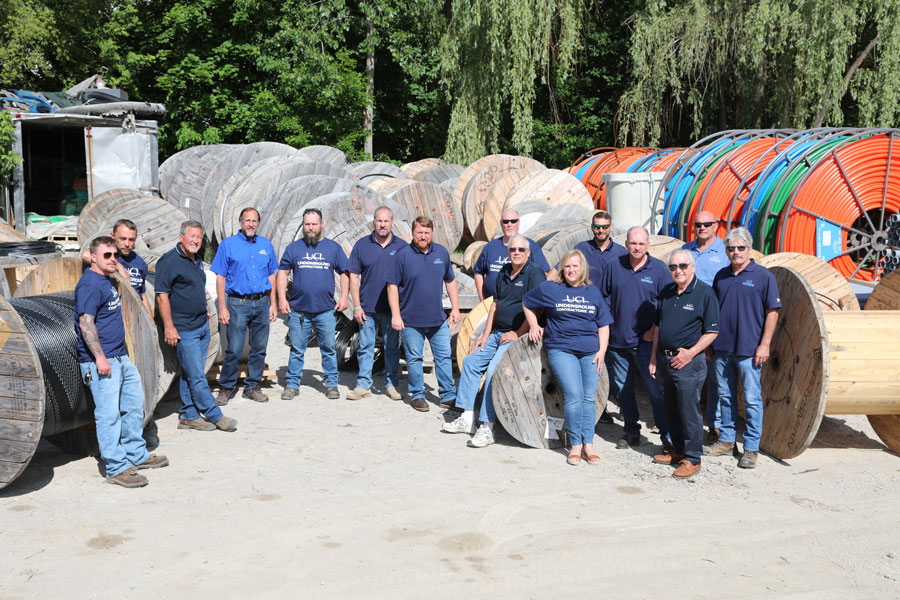 Originally from Rochester, Indiana, Bob has been with the UCI team since 2012. He began in Indianapolis and moved to the Wixom office in early 2017. Bob started working in the vehicle maintenance industry at 16. He joined the United States Air Force in 2001 as a Vehicle and Vehicular Equipment Maintainer and served two tours in Iraq and one in Korea before returning to civilian life in mid-2012. Since then, he has been an important member of the team at UCI. When not working, he enjoys shooting sports, drag racing, and family time.

Originally from Farmington Hills, Matthew has over 10 years of experience, including 2 years with UCI. He maintains inventory and material order management for current and future jobs, as well as the calculation of materials needed for new jobs and distributing them in a timely manner. He also manages the dispatch of truck drivers for needed equipment and materials on site. Matthew’s extracurricular Interests include building and riding motorcycles, camping and outdoor activities.

David has been with the UCI team since 1984. He ran the first directional bore crew when it was introduced to the industry and has been in a supervisor position for over 20 years. David strives to provide the best customer service for all of UCI’s customers, large and small. David is proud to work for a goal oriented family business. Outside of work, he likes to spend time with his two children and five grandsons.

Micheal has over 30 years of experience in the construction industry. Before joining UCI, he was a carpenter for 20 years. Since joining UCI, he has worked for 10 years in aerial construction, including 7 years as a foreman. In his position, Micheal makes sure the crews finish jobs efficiently and on time and is an expert in getting emergency jobs done. Out of work, he enjoys hunting, fishing and spending time with his family.

Joe Fuller has spent nineteen total years in the industry, with seventeen of those years dedicated to UCI. He began as a foreman in 1999 and worked in that role before transitioning to a supervisor position in 2010. His specialty is in aerial construction with over 4,000 jobs completed as a supervisor and countless more as a foreman. His favorite part of his job has been traveling across all parts of Michigan over the years. When he isn’t working on the job site, he enjoys spending time with his family.

Brian Mecum is originally from The Detroit Metro area and has spent an impressive thirty-four years in the industry during which he has developed a specialty in underground construction. His favorite aspect of being on the UCI team is being a part of the company’s growth and great reputation. When he isn’t working, he enjoys spending time with his family.

Kevin Mecum, originally from Troy, MI, is one of UCI’s expert supervisors. Kevin has spent over twenty-five years in the industry, during which he has completed thousands of underground construction jobs. His specializes in directional boring of freeways and building underground fiber optic networks through city environments. His favorite aspect of being on the UCI team is the family atmosphere. He feels that because many of the workers in the family-owned company are related, the entire operation has a family feel. When he isn’t at work, Kevin prefers to spend his free time with his wife and kids.

Dale has been a Safety Manager at UCI for 2 years. He brings over 11 years of experience to the team, ensuring that employees comply with federal, state, county, city, township, client and UCI health and safety regulations to promote the wellbeing of everyone involved. Before joining UCI, Dale worked as a Safety NCO in the United States Air Force and as a Senior Compliance Manager for Fleet Operations with AT&T.

John Saylor has over 37 years of experience in the industry. Originally from White Lake, John has completed thousands of underground construction jobs and has developed a specialty in underground utilities. John currently runs our Northern Michigan operations. John’s favorite aspect of being on the UCI team are his exceptional team members. When he isn’t working, John enjoys spending his time golfing, fishing and traveling.

David has over 42 years of experience in the industry, having worked with everything from cabling, to fiber insulation, to management. After retiring from AT&T, David joined UCI. Here, he ensures the completion of all aspects of jobs. In his spare time, David enjoys boating.

Corey has 5 years of experience with UCI. He started at the company as a laborer and has worked his way through the levels to become a splicing manager. He manages crews, always making sure they know what is expected to get the job done to a satisfactory level. Corey is FOA-Certified in OSP splicing, and also has knowledge in various testing applications like OTDR and IOLM testing. When he is not at work, Corey enjoys traveling up north and spending time with family and friends.

Michael has over 30 years of professional experience, during which he has designed an extensive array of major fiber builds and other utility infrastructure. He joined UCI in 2013 and is currently designing, estimating, and permitting aerial, underground, and interior builds from client backbone fiber to customer’s suites. Michael believes that “the best thing about working at UCI is the team approach to completing projects.” His free time is spent enjoying life with his expanding family, traveling, and competing in sports events.

Started in the industry in 1999, with over 20 years of experience with just about everything underground-related. Directional boring foreman for 10 yrs before taking area supervisor position at UCI.  When not working I enjoy spending time with my daughter and friends at the drag strip and racing.

Mike has been working in the industry since 2000. He started with UCI as a concrete foreman, and eventually moved up to a bore foreman before taking the supervisor position. In his free time, he enjoys spending time with his kids and grandkids.

Dawn has over 30 years of management experience in various industries spanning banking, finance and accounting. She joined UCI in 2014 and currently oversees the office operations including Accounts Receivable, Accounts Payable, Finance & Human Resources. Dawn believes that UCI’s dedicated long-term employees speak volumes about the great opportunities UCI has to offer its employees. In her downtime, Dawn enjoys reading and spending time with her family.

Del Mecum Jr. is the Vice President of UCI. Del has spent 37 years in the industry, during which he has completed a countless number of jobs to clients’ satisfaction. His specialty is outside plant construction for utilities. His favorite part of being on the UCI team is the pride of the employees. When Del isn’t working, he prefers to spend his free time boating.

Davin has 18 years of fiber splicing experience which has consisted of; inside plant data cabling, network installation, central office structural engineering, and the testing and turn up of equipment. Davin has played major roles in several large data center builds and has worked in hundreds of central offices across the United States. The last eight years consisted of mostly outside plant fiber optic installation, fiber splicing and routing, network engineering and troubleshooting, and emergency restoration. Davin believes that “being part of a great team of professional colleagues that you can work through issues, solve problems, exchange ideas, and learn from,” is the best part of working with UCI. Davin is originally from the Lansing area and spends his free time enjoying the outdoors with his family.

Join the UCI Team
Apply Online
Discover the UCI way...
Get a Quote